Posted on Jul 28, 2010   |   Comments (0)
every so often, a celebrity will change up his or her hairstyle, to be met with various degrees of success. with clients coming in every day, armed with photos of those stars with the most covetable cuts for inspiration, we're always keeping an eye out for celeb hair transformations. lately, it seems that several celebrities have decided to experiment with different cuts, colors and styles. let's see how these new styles fare when compared with their predecessors: 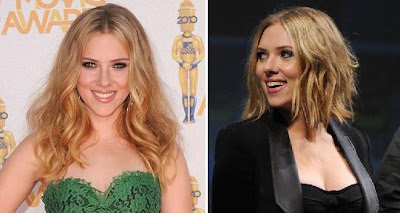 over the weekend at comic con, scarlett johansson debuted her latest look -- a choppy, angled bob with the front slightly longer than the back. she styled the new cut in tousled waves. while we wonder what it'll look like with sleeker styling, we applaud scarjo's willingness to take risks with her hair (she's done it all, from pin-straight and dark brunette to platinum blonde and everything in between). this is a risk that certainly pays off, as the shorter length flatters her face. 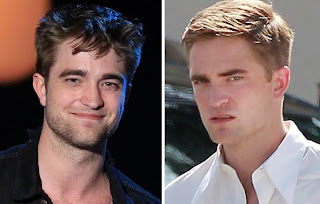 while he is most infamous for his straggly, unwashed locks and seemingly permanent five o'clock shadow, twilight star robert pattinson proved that he cleans up quite well. on the set of his latest movie, water for elephants, he sported a clean-cut, properly brushed hairstyle and clean shaven face. although some of you twi-hards may prefer your edward in all of his disheveled glory, we definitely approve of this new look.

unfortunately, we are not exactly big fans of katie holmes' latest change-up. at a recent movie premiere, holmes was seen with a newly shorn side bang, with the rest of her hair in a shaggy, wavy style. we don't mind the waves (in fact, we adore the look on the left, where her languid waves remind us of when she was dawson's creek's girl next door), but her bangs are at an awkward length (too far above the brow to be styled to the side) and they simply look heavy.